“Was that a coyote? Get those pests before they scare the livestock!”

The coyote is an animal found in Red Dead Redemption.

Coyotes are small, typically weighing around 40 lbs (18 kg), smaller than the dogs and wolves found in-game. They are generally tawny brown in coloration. Coyotes seem to be primarily nocturnal; although it is possible to encounter them during the day, they are much more frequently seen at night.

The player can hunt and skin coyotes for fur and meat. To complete level one of the Master Hunter Challenges in Single Player, the player must kill and skin five of them. They are also required to be shot as part of the Sharpshooter Challenges for both Single Player and Multiplayer modes. Coyotes travel in packs.

During Single Player, there are Random Encounters throughout the game, in which the player can save a person being attacked by coyotes. Killing the attacking animals will earn the player a small sum of money and fame as a reward.

Coyotes and wolves are closely related and easily confused for one another. On the whole, coyotes are the less dangerous canine predators in the game; however, the player should not consider them completely harmless predators. Coyotes are less vicious than wolves, and will only attack a character on foot if there are three or more of them in a pack; the pack will usually flee if it is reduced below three Coyotes. They are even less likely to attack players riding a Horse. Coyotes are less willing to attack than their larger cousin species, the wolf, as they are much smaller, and much less powerful. Coyotes will run away once a gunshot is fired.

Wolves tend to keep much larger packs than coyotes - while one can see massive packs of twenty wolves in West Elizabeth, coyote packs exceeding five or six individuals are rare. Coyotes are generally seen in these smaller groups or in pairs - loner coyotes are encountered less frequently than pairs or small packs of coyotes.

The wolf is the larger of the two species, and is more thickly built than the coyote, which is far leaner and smaller. Coyotes can be distinguished by their whiny, high pitched howls; they also do not make the deep, barking-growl sound of attacking wolves. Wolves are generally more grayish or black as compared to coyotes, which tend to be browner in color.

Coyotes can be found virtually everywhere in both New Austin and Nuevo Paraiso, and are typically nocturnal; however, they are not often seen in most areas of West Elizabeth, as this area is populated by many larger and more powerful predators.

Coyotes can be found anywhere around Armadillo. The vicinity surrounding Hanging Rock and MacFarlane's Ranch both have substantial coyote populations. Gaptooth Ridge also has large numbers of coyotes, generally tending toward the southern area of the region rather than the north.

Nuevo Paraíso has a large coyote population, especially between Chuparosa and Escalera. Coyotes are ubiquitous in Mexico. Beware of wolves, as the two species can be easily confused, and both found in the same areas.

Coyote lunging at the player on Mesa de la Luna. 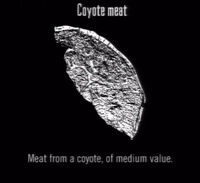 The meat of a coyote 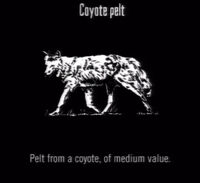 The pelt of a coyote 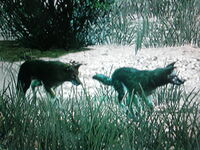 The player must kill a coyote to obtain the following trophy/achievement: