D.S. MacKenna is a minor character and Stranger featured in Red Dead Redemption. He appears in and gives the player the Stranger side-mission "Lights, Camera, Action".

D.S. MacKenna is an early pioneer of professional film making. He has aspirations to start an emerging film industry in New Austin. His name, personality, and pioneering efforts in the film industry were probably inspired by early filmmaker D.W. Griffith.

He can initially be found in the backroom of the Cinema in Armadillo, posed in dramatic contemplation on the bed. MacKenna wants to create a new film studio and bring the motion picture industry to New Austin. He promises a reward to Marston if he will bring him the deed to a ranch just north of Armadillo by beating its owner in a game of High Stakes Liar's Dice in Thieves' Landing, as well as bring his lead actor, Spatchcock, who convinced himself that the gunslinger role he acts is true, back to Earth, as MacKenna is worried he's going to get himself killed. Marston says if he sees him, he'll tell him.

After Marston wins the deed to the ranch and knocks some sense into Spatchcock, he returns to MacKenna. MacKenna then says he probably has more adventures that await him, and Marston wished him good luck.

However, it is far from good luck that MacKenna has. Marston runs into him at the Pacific Union Railroad Camp once the player gains access to West Elizabeth, sitting by a fire and carving a piece of wood. Marston asks him what happened to his film studio dreams, and he explains "how the fates have spurned [him]." He says he lost everything he invested into his studio after filming was delayed by weather and Spatchcock ran off with the cameraman to Canada. "Damn you, the gods of bad weather, and the hearts of vain men!" MacKenna then states he'll "have to go make dreams elsewhere." After Marston wishes him good luck yet again, MacKenna says "It'll take more than luck to stop me!"

MacKenna can be found in Plainview after saving the town from the Undead, where he'll initiate the mission "Filth and Other Entertainment".

MacKenna views the undead apocalypse as the perfect opportunity to make a big blockbuster film (according to him, a film aimed at "the lowest common denominator") and has already tied up one undead as an actor. MacKenna wants Marston to capture one Retcher to assist him in his misguided attempt to make a film about the undead.

After MacKenna releases the two zombies "to act", he is quickly devoured. Afterward, he returns as an Undead, and Marston has the option to shoot MacKenna and his attackers. 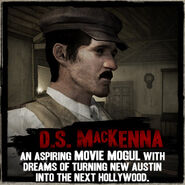 D.S. Mackenna in the back of his cinema.

D.S. MacKenna in the last encounter in Pacific Union Railroad Camp.
Add a photo to this gallery

Retrieved from "https://reddead.fandom.com/wiki/D.S._MacKenna?oldid=386768"
Community content is available under CC-BY-SA unless otherwise noted.