Dapper Dan is a minor character in Red Dead Revolver.

Dapper Dan (real name Daniel) is a big thug who usually hangs around his even bigger brother, Sam. They are often in the saloon in Brimstone, starting fights and causing trouble. Although he has a bounty on his head, not even Sheriff Bartlett was brave enough to take on him and his brother together. That is until Red came along.

Dan is first seen while Red walks into a saloon. He is laughing with some friends about Colonel Daren, mentioning that he lost his arm, and how it was replaced with a cannon. Red becomes intrigued and asks how Daren lost his arm. Dan tells him it's none of his business and goes back talking to his friends. Red becomes enraged, breaks a bottle on a table, and holds it to Dan's neck, trying to force him to tell him what he wants to know. Dan's older brother, Sam interrupts, and Red backs away once he sees Sam. Red is smacked across the head, and a saloon fight ensues. Dan and his brother escape using the chaos as cover. Red then finds Dan after dealing with the saloon fight. Dan says he is fed up with Red, and he doesn't like people who don't mind their own business. A duel ensues, in which Red draws first and shoots Dan dead.

After completing the mission "Saloon Fight" with a good rating, the player unlocks Dan as a playable character in Showdown Mode. For some reason, Dan uses a Widowmaker as his primary weapon in Showdown.

Dan is listed in Sheriff Bartlett's Journal on pages 146 - 147 under the Wanted - Dead or Alive section. The pages are unlocked by completing "Saloon Fight" with a Good rating. 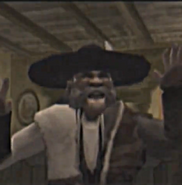 Dan in his last duel
Add a photo to this gallery

Retrieved from "https://reddead.fandom.com/wiki/Dan?oldid=384954"
Community content is available under CC-BY-SA unless otherwise noted.