Danny-Lee Caton is a major character featured in Red Dead Online. He serves as a secondary antagonist of the Moonshiners DLC.

Danny-Lee was a moonshiner working with Maggie Fike and her nephew Lem. They are said to have ran the moonshining business in Lemoyne up until 1892, when they were caught by Reid Hixon and his revenue agents. Danny-Lee managed to escape, and later found protection with the Braithwaite family, who hired him to oversee their own moonshine production.

A Life of 'Shine

In 1898, Maggie resumes moonshine production, aided by Lem and the protagonist, and begins sabotaging the Braithwaites' business. Following the protagonist's initial disruption of their operation, Danny-Lee accompanies Bartholomew Braithwaite to confront them at their shack in an attempt to intimidate them, but their threats are waved off by Maggie.

Later, Maggie arranges a meeting with Bartholomew and Danny-Lee under the guise of making amends by providing a shipment of moonshine, and has Lem anonymously tip off Reid Hixon. When Danny-Lee and Bartholomew arrive at the meeting place to find no one, they are quickly held at gunpoint by revenue agents. Danny-Lee is arrested while Bartholomew bribes Hixon to let him go. The agents also capture the protagonist and Lem, who were hiding nearby, but they escape after Lem accidentally shoots a wagon full of explosive moonshine that they brought, setting the surrounding swamp on fire. After killing Hixon, the protagonist captures Danny-Lee and brings him to their shack, where Maggie confronts him. While seemingly set on killing him, she relents to let him go on the condition she would never to see him again.

Danny-Lee possesses a cowardly and self-serving personality, as evident when he left his business partner and friend of six years to burn. He later joined with the Braithwaite family simply for protection and attempted to bully Maggie when he had a group of gunmen and a Braithwaite backing him up, showing no restraint or regret - despite his past association with Fike.

Danny-Lee is an Afro-American man with a heavy build and large mustache. In 1892, he is seen in a white striped collar-overshirt. In 1898, he wears a light blue shirt with a patterned vest. 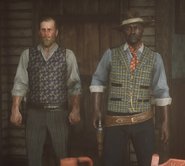 Caton and Bartholomew Braithwaite in the Moonshine Shack