Davey was mortally wounded during the failed ferry robbery in Blackwater after sustaining a gunshot wound to the gut.[3] As the gang flees north into Grizzlies West, Davey barely clings onto life, and passes away shortly after the group reaches Colter. Micah is informed of Davey's death and is regretful, describing him as "a real fighter".

In a random encounter with a patrol of Pinkerton Agents that the player can have as Arthur Morgan in the area South of Annesburg during this chapter, a Pinkerton agent can be overheard shouting out "You're about to join those Callander Brothers [in death]" while the Pinkertons try to shoot Morgan. This implies that the Pinkertons have somehow learnt that Davey has died after the gang's escape from Blackwater.

Davey with Abigail and Tilly 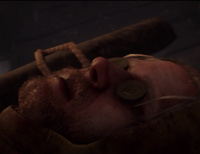 Davey after the gang arrives in Colter 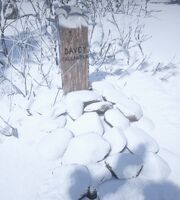