Davey was shot and mortally wounded during the failed ferry robbery in Blackwater. As the gang flees north into Grizzlies West, Davey barely clings onto life, and passes away shortly after the group reaches Colter. Micah is informed of Davey's death and is regretful, describing him as "a real fighter". 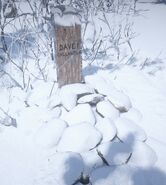 Davey Callander's grave.
Add a photo to this gallery

Retrieved from "https://reddead.fandom.com/wiki/Davey_Callander?oldid=373968"
Community content is available under CC-BY-SA unless otherwise noted.