View source
watch 01:41
What is Dead Eye Targeting?
Do you like this video?
Play Sound

Dead Eye Targeting is a game mechanic present in every installment of the Red Dead series, which slows down time to allow the player to get more accurate shots on enemies. After marking targets, normal time resumes and a flurry of bullets are released in quick succession.

Red Dead Revolver introduces the Deadeye system (spelled as a single non-hyphenated word in that game). The player begins with three slots in the Deadeye meter, with each slot representing a single use of the mechanic. The slots are gradually refilled as the player gets kills, with headshots refilling the meter faster. The player can add more slots to the meter by meeting challenges and by purchasing items.

When using Deadeye, the weapon crosshairs cycles between three positions - a wide yellow cross, a slightly narrower red cross, and a tight red cross. The latter provides a critical hit which reduces the enemy's health more significantly. Shots are marked by using the

button. The ammunition capacity of the weapon determines how many shots can be marked. The player can use the R2 or RB button at any time to end deadeye and to cause all marked shots to be completed.

Red Harlow, the main playable character, uses Deadeye, while other playable characters have different skills that use the same meter. Jack Swift uses a form of Deadeye, with the difference that all shots are automatically marked and completed very rapidly, up to the maximum ammunition capacity, rather than being marked by the player.

All duels use Deadeye, but with a limited duration that varies based on the level of the enemy.

There are three levels of Dead Eye in the story mode of Red Dead Redemption, each level being unlocked as the storyline progresses. Marston is invincible while in Dead Eye and incoming shots do no damage. Dead Eye can also be used within the Undead Nightmare DLC.

Dead Eye level 1 is acquired during the second mission "New Friends, Old Problems" for Bonnie MacFarlane. Level 2 is acquired during Nigel West Dickens mission "You Shall Not Give False Testimony, Except for Profit" and Level 3 from Landon Ricketts in Chuparosa, in the mission "The Gunslinger's Tragedy".

Sniper rifles, such as the Carcano Rifle and Rolling Block Rifle, only slow down time and do not allow marking of targets, therefore the three levels are equivalent for these weapons. These weapons are not generally available before reaching level 3 in any case.

The Dead Eye meter is refilled by hitting enemies, with headshots refilling the meter faster. Consumables also refill the meter as noted below.

Slows down time while the player moves the reticle over targets and manually fires each shot.

While in Dead Eye mode, moving the reticle over an enemy automatically places marks on that specific location. As soon as the fire button is pressed, all of the marked locations will automatically be fired at, even if the opponent has moved behind cover when the sequence started. It is therefore advised to target enemies close to cover first. If Dead Eye is exited without any marks placed, no shots will be fired.

While in Dead Eye mode, the player can press the

(Xbox 360) to mark enemies manually. Pressing the fire button after enemies have been marked will automatically make the player fire at the targets in the order they have been placed. Shots marked while enemies are out of cover will be attempted regardless of whether the enemy is still visible.

Attempting to fire without placing a mark will send one bullet towards the target and end Dead Eye at the same time. With the exception of certain weapons, you cannot fire and remain in Dead Eye without queuing shots. Weapons with a magazine size of one, namely the Buffalo Rifle will make the player go out of Dead eye, while the two scoped weapons, the Rolling Block Rifle and Carcano Rifle, will still stay in slow-motion after being fired, initiating the reload sequence.

Dead Eye Targeting is activated by holding the "Aim" button (

on Xbox360) and clicking the right analog stick or

While in Dead Eye targeting mode, aim with the right analog stick and fire with

At Level 3, targets can also be manually "painted" using the

(Xbox 360). This allows the player to select the exact point in which the bullet will hit, providing extra precision, should it be required.

(Xbox 360). The player will return to normal aiming mode once the Dead Eye meter has been emptied.

The following items restore the Dead Eye meter, as with other consumables they can only be used in singleplayer.

Dead Eye can be used in Redemption Multiplayer, but does not slow down time. It can be used to paint targets automatically on other players as in level 2. This allows players to dispatch multiple enemies quickly. Dead Eye is recharged by killing players or NPCs or finding dead eye chests scattered across the map. These appear as a small, bright green light.

In Free Roam, there is an invisible circle encompassing the Dead Eye Recharge and the Ammo Crate. This is a safety zone from animals. Animals will charge at the player while within this circle, but will stop at the edge and walk the perimeter. This is an easy way to kill dangerous animals. Just stay within the circle and shoot them from safety. The player can still be injured by NPCs and other players.

The Deadly Assassin Outfit allows the player to regenerate Dead-Eye twice as fast. This was one of three contenders for the outfit pre-order bonus. The Deadly Assassin outfit won and was available at selected retailers when pre-ordering a copy of Red Dead Redemption. The outfit was subsequently included in the Game of the Year Edition and released as DLC on the PlayStation Store and Xbox LIVE for the cost of $0.99 or 80 Microsoft Points.

Obtaining the Legend of the West Outfit by completing the Single Player Challenges grants the player a greater amount of Dead Eye. Wearing the outfit itself has no effect.

Dead Eye Targeting in Red Dead Redemption 2 is similar to how it was in Red Dead Redemption. However, Dead Eye Targeting is now divided into 5 levels which will be unlocked as the story progresses, bonus abilities of Dead Eye can also be obtained through leveling up Dead Eye through hunting, skinning or completing special challenges. Unlike previous installation, players still receive damage while they are in the Dead Eye mode.

A chupacabra about to be shot in the head by Zombie Marston. 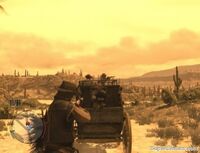 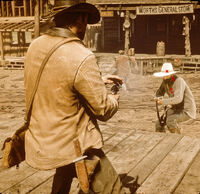