watch 01:12
What is the Deadly Assassin Outfit?
Do you like this video?
Play Sound

The Deadly Assassin Outfit is an outfit in Red Dead Redemption that is available as downloadable content (DLC) or with the Game of the Year Edition.

“You are the most bad-ass gunslinger in the West! Dead Eye regenerates twice as fast.”

With this outfit, Marston swaps his normally worn clothing for a black frock coat, dark ashby vest, and a black shirt with a white collar. He also changes his normal headgear for a wider, flat-brimmed black hat, and he adds an eyepatch over the left eye. He also tucks his pants into a set of jackboots.

This outfit, though originally only available to those who pre-ordered the Special Edition of the game from a GameStop retailer,  is now available for download over the PlayStation Network or Xbox LIVE as of April 12, 2011.

The player will need to gather five scraps to obtain the Deadly Assassin Outfit:

† See the Bugs section, below, for a known issue with this scrap.

The Deadly Assassin Outfit is the winning outfit of the Rockstar Games and Gamestop Red Dead Referendum alongside the Expert Hunter Outfit and Savvy Merchant Outfit. If the Special Edition was pre-ordered through Gamestop, a code was included to unlock the outfit's challenges. The code was not a PSN or XBL code, it was a "Rockstar Games" code and was entered through pressing the "Downloadable Content" button on the game's main menu. It should be noted that although the outfit appears as unlocked in the in-game start menu (the name shows, rather than just displaying "Locked"), the player still has to complete the challenges listed below to actually be able to wear it.

The outfit is also included with the Game of the Year Edition released in 2011.

Close-Up of the Deadly Assassin Outfit. 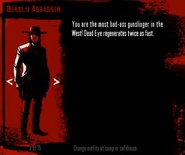 John wearing the outfit, without his hat.

thumb|300px|left|Guide on how to get the Deadly Assassin Outfit.

Retrieved from "https://reddead.fandom.com/wiki/Deadly_Assassin_Outfit?oldid=300548"
Community content is available under CC-BY-SA unless otherwise noted.