Start a Wiki
watch 01:11
What is Death?
Do you like this video?
“With hell following close behind, Death carries with him a violent wake that rattles through the skulls of the undead.”

Death is a mythical horse found in the Undead Nightmare DLC pack for Red Dead Redemption.

Death is one of the Four Horses of the Apocalypse, along with War, Famine, and Pestilence. Death is capable of instantly killing any undead that it collides with by causing their heads to explode. There is a ghostly trail of wind following Death. Death is almost invincible and cannot be killed from conventional damage, other than a fall of great height, a shot to the head, drowning, shot several times by a Gatling gun which makes Death randomly die later on, or using an explosive rifle causing him to explode into pieces. Horse pills negate Death's unlimited Stamina.

Before finishing the Undead Nightmare storyline, Death can be found in the wild. Death's location is entirely random, but is similarly located to the general areas that the other three Horses of the Apocalypse can be found. When near, a notice will come up saying "a mythical creature has appeared in the area". Death will only randomly appear after taming the other three Horses of the Apocalypse prior.

Upon completing the Undead Nightmare storyline, the player will receive Death.

Even though the horses spawn points seem random they are indeed not random at all. Since this is a 360 game there are only so many spawn points for the four horses. They spawn at specific locations at specific times. A great example of this is one of Death's spawn points just a little southwest of Las Hermanas in which he will likely not spawn until Sunday at six thirty three, if you just stand there and wait until six thirty on Sunday the circle can appear and he might have spawned there. Death can also spawn in the Great Plains around 6 am - 8am depending on the circumstances in which the player has found all three other horses (War, Famine and Pestilence) and how long the player has gone without finding Death. 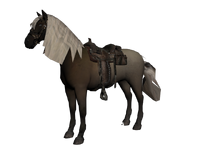 Retrieved from "https://reddead.fandom.com/wiki/Death?oldid=388432"
Community content is available under CC-BY-SA unless otherwise noted.