A shrub found in desert areas, it bears purple flowers.

† = Note: This means that the player should not sell any flowers he has collected until he has completed "Flowers for a Lady."

Desert Sage scrubs can be identified by the delicate purple floral bracts. The size of these scrubs can range between two to three feet in height. This type of sage can only be found growing to the west of Gaptooth Ridge, New Austin. The plant's medicinal effects can be used to increase your Stamina Core if consumed or crafted into Bitters.[1]

It grows out west in and around Gaptooth Ridge. It can be found in abundance directly between Ridgewood Farm and Odd fellows Rest. Along with the Butterfly Weed it can be found scattered around Diez Coronas, and scarcely found east of Las Hermanas near Casa Madrugada. It can also be found south of Benedict Point. Another point of interest, but scarcely found, is just a little north west of Torquemada. It is most abundant around Hamlin's Passing and North of there along edge of the map. 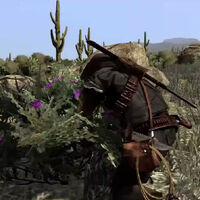 Gathering plants and flowers contributes toward the following Trophies/Achievements:

Retrieved from "https://reddead.fandom.com/wiki/Desert_Sage?oldid=389812"
Community content is available under CC-BY-SA unless otherwise noted.