Diego is a member of the Federales.

Diego can most often be found in Chuparosa outside the Mayor's Office. However, if Marston has a bounty, Diego will become hostile and attack him.

Diego can also be found in a random encounter in which his prison transport is attacked and two criminals have broken loose. He will then ask the player to catch or kill the criminals. He can also be killed but this will result in negative honor. 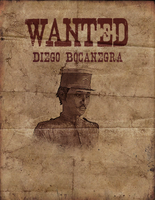 Diego's Wanted poster
Add a photo to this gallery

Retrieved from "https://reddead.fandom.com/wiki/Diego_Bocanegra?oldid=381217"
Community content is available under CC-BY-SA unless otherwise noted.