Digby Haskins is a member of the Treasure Hunters gang.

Digby plays a small role in the mission "Man is Born Unto Trouble", in which he is seen lighting the fuse on a TNT barrel set on the mine cart tracks to prevent Marston from taking the Gatling Gun. He can also be seen racing during the mission "Liars, Cheats and Other Proud Americans".

Also, Digby can be found at Gaptooth Breach. However, unless wearing the Treasure Hunter Outfit, he will be hostile.

In Undead Nightmare, Digby can be found defending Gaptooth Breach, where he is on the roof of one of the buildings. If Gaptooth Breach is saved and Digby survives, he will congregate with the other survivors near the main building. 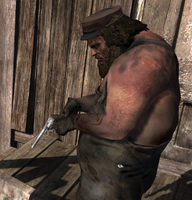 Retrieved from "https://reddead.fandom.com/wiki/Digby_Haskins?oldid=387636"
Community content is available under CC-BY-SA unless otherwise noted.