Dorothea Wicklow is an outspoken activist of the women's suffrage movement, who is based in Saint Denis.

Wicklow can be seen at Mayor Lemieux's party, at his residence in Saint Denis.

She preaches her belief that women should have the right to vote outside of the Tailor in northern Saint Denis, from 12 PM to 6 PM. She has a sign next to her which reads:

"Votes for women. Abolish discrimination against half of every home."

Dorothea is a middle-aged to elderly woman; she wears circular glasses, has wavy, grey hair, wears golden earrings and has a sash which reads "Votes for women." She wears a black frock with a white shirt underneath, and has white gloves on her hands. She has a large frame, and appears to be overweight. She has a wide waist and is shorter than the average person. 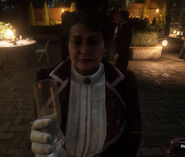 Dorothea Wicklow in "The Gilded Cage"