“Fires a spread of pellets, making it great for moving targets. Double tap the trigger to fire both barrels.”

The Double-barreled Shotgun (also known colloquially as the "Coach Gun") is a weapon featured in Red Dead Redemption.

The Double-barreled Shotgun is one of four Shotguns available in Red Dead Redemption. As with the Sawed Off Shotgun, the player can double-tap the trigger button to fire both shells at once for a more powerful attack (at the cost of needing to reload immediately).

It has the tightest spread of any shotgun in-game, making it extremely useful for subduing targets. If at a far enough distance, a well placed shot to the lower leg can cripple the target without any fatal damage being dealt. During Bounty Hunting, it's possible to shoot a target at range, then move up with the Lasso for an easy Hogtie or finish the target off with ease. But, if shooting a target at point blank range on the leg, it will force him to bleed out and die from his injuries. It is not a good weapon for storming crowded areas, as it gets two shots before having to reload. It does, however, excel at hunting, where the two shells can take down nearly any beast encountered. 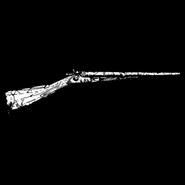 Using this weapon, the player can acquire the following Trophies/Achievements: