With the addition of the Myths and Mavericks DLC pack, Drew MacFarlane is also a multiplayer character model that may be selected in the "Revolution" section of the Outfitter.

Drew MacFarlane is the owner of the MacFarlane's Ranch and father of Bonnie MacFarlane. Drew is an elderly man, and has survived through plague, drought, cold winters, and turf wars to operate his ranch and is highly suspicious of outsiders, including John Marston. Drew is a loving and caring father, as has taught his daughter Bonnie how to break horses and run a ranch. Drew and John later become friends and both agree that the government is starting to get out of hand.

Drew MacFarlane is seen for the first time in "Wild Horses, Tamed Passions", where he accompanies John and Bonnie to tame a herd of horses. John breaks only two, the first being taken away by Drew.

He is not seen again until "The Burning". When Bonnie is troubled when she can not find her father, and asked John to help her find him. When they find him, they discover that Drew has come across a dead man, a dying man, and two dead horses. Drew suspects local gang activity. He then requests that John and Bonnie go and get a wagon. However, upon returning to the ranch, they discover that the ranch's barn is ablaze. Not long after, Drew goes to Leigh Johnson, in a panic. Bonnie had been kidnapped. When John appears at the sheriff's office, Drew begins to question him, until one of Bill Williamson's henchmen appeared and claimed that his group has kidnapped Bonnie MacFarlane. John then promises to find his daughter for him, which calmed him down. Marshal Johnson, John and the Deputies then leave Drew behind to find Bonnie.

He is not seen again until near the end of the game when John Marston and Jack Marston go to MacFarlane's Ranch to buy cattle. Drew greets John and Jack as they ride into the ranch, stating he is surprised to see John again. He then waves them off as they leave, inviting them to return sometime. This is the last time John encounters Drew.

Unlike the other main characters, his fate after John's death isn't revealed. 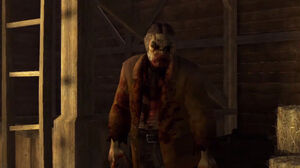 In Undead Nightmare, Drew MacFarlane has been keeping the undead locked up in the barn. When John arrives at the MacFarlane Ranch, Bonnie notes that he's been in the barn since the previous day. John investigates and finds six of the undead wandering around. Upon killing them, Drew appears, having been infected and turned undead. John is forced to put him to rest and bring the bad news to Bonnie afterwards.

Drew as a Redemption Multiplayer skin. 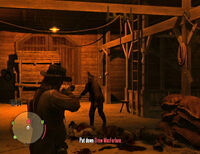 Drew MacFarlane in Undead Nightmare
Add a photo to this gallery

Retrieved from "https://reddead.fandom.com/wiki/Drew_MacFarlane?oldid=365933"
Community content is available under CC-BY-SA unless otherwise noted.