Dual-wielding is a gameplay mechanic featured in Red Dead Redemption 2 and, to a lesser extent, Red Dead Revolver.

In Revolver, the only dual weapon available in normal gameplay is the Twin Revolvers. Mechanically, they work the same as the standard Revolver model with an identical rate of fire and stopping power. The Twin Revolvers' only difference is its doubled ammo capacity, which translates in a longer reloading time.

During the story mission "Freak Show", the players get to control Jack Swift and his unique set of weapons, the Showstoppers, a pair of custom Twin Revolvers. The weapon is also available when choosing Swift as the playable character in Showdown Mode.

Dual-wielding is added as a regular game mechanic in Redemption 2. The protagonist can dual-wield any pair of handguns. The player can dual-wield any combination of handgun models, whether they be pistols, revolvers or even Sawed-off Shotguns. However, this mechanic isn't available at the beginning of the game. It can only be done after the player unlocks the second holster, which is given to the player by Micah Bell after completing "Blessed are the Meek?".

Duel-wielding is unlocked in Red Dead Online at level 25. It can then be utilized by purchasing an off-hand holster from a gunsmith for under $10. 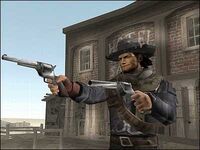 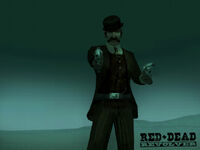 Arthur Morgan with two Cattleman Revolvers, in the swamp of Bayou Nwa.

Retrieved from "https://reddead.fandom.com/wiki/Dual-wielding?oldid=395949"
Community content is available under CC-BY-SA unless otherwise noted.