View source
watch 02:17
Dueling in Red Dead Redemption
Do you like this video?
Play Sound 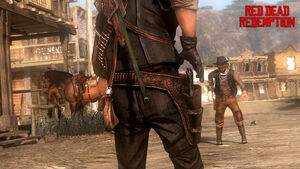 Dueling is a gameplay element in all three installments of the Red Dead series. A staple of Western stories, duels involve opponents facing each other over a short distance and attempting to draw their weapon and shoot their opponent before their opponent can do the same to them.

In Red Dead Revolver, dueling is a major gameplay element featured in ten of the twenty-seven story missions. In these missions, Red Harlow must duel from one to three opponents at a time. In some cases, the duel occurs as a single objective within the mission while in other cases the duel represents the boss battle that ends the mission.

A dueling tutorial is presented to the player during the mission "Ugly Streetfight". Dueling consists of four stages: the grab, the draw, acquiring locks, and firing.

In the draw, the player moves the right analog stick back up to remove the weapon from its holster after the grab has been completed. The speed of movement is critical - the draw should be as quick as possible to beat the opponent to the targeting phase, but drawing too quickly can cause the player to overshoot the target.

To acquire locks, the right analog stick is used to move the crosshairs over the opponent's body. During this phase, the crosshairs narrow and cycle colors between yellow (poor shot), dark red (hit), and bright red (critical hit). The right trigger is used to mark shots. Marking shots while the crosshairs are bright red will deal the most damage to the opponent, therefore requiring the fewest shots to drop them. Shots to the head deal the most damage. Multiple quickly-acquired critical hits are required for the toughest opponents in the later stages of the game. Up to six shots can be marked.

Once six shots have been marked or the slow motion targeting phase times out, shots are fired. The player can manually start the firing phase early by clicking on the right analog stick. If the player has caused sufficient damage with sufficient speed, the opponent(s) will be killed. If one or more opponents are not killed, Red will be hit and fall to the ground. If his wounds aren't fatal, he will shortly stand back up and have a chance to finish off his opponent(s) with normal shooting.

The Battle Royale is an annual dueling competition in Brimstone that occurs towards the end of the campaign in Red Dead Revolver. It spans two missions: "Battle Royale" and "Battle Finale".

In Showdown Mode, the multiplayer mode of Red Dead Revolver, the "High Noon" game option sets up a last-player-standing dueling contest between two to four players.

In Red Dead Redemption, dueling occurs in several story missions and Stranger side missions as well as in random encounters or when caught cheating at Poker.

One-on-one dueling does not occur as an official activity in multiplayer. The Standoff that occurs in many multiplayer game modes is a similar concept, but with more duelers, however.

Success in a duel means filling your "duel meter" faster than your opponent does his. Once Marston draws his weapon, the player must "paint" the target with a Dead-Eye type expanding crosshair reticle. The reticle will repeatedly grow and turn red, then shrink and turn white. Pressing the Right Trigger (Xbox 360) or R2 button (PS3) when the reticle is red will fill a miniscule portion of the meter, while marking a shot when the cross-hair is white will fill a larger portion of the meter. Shots to the chest and head will fill the meter quickly, while shots to the stomach or legs will fill less of the meter. Keep in mind that the player's meter doesn't need to be completely filled to win the duel, it only has to be larger than your opponents. Once your meter is filled, the R2 button (PS3) or the Right Trigger (Xbox 360) fires the shots.

You may also win a duel by disarming your opponent. To disarm an opponent, the player must mark the NPC's arm or gun, and can still mark others spot on the body after. After the mark is placed correctly, the player's meter will fill by a large amount, likely winning the duel with only one shot.

Killing an opponent generates Fame, while disarming an opponent will generate both Honor and Fame. Most opponents encountered throughout the course of the main storyline and Stranger side-missions cannot be disarmed and must be killed. However, while it is possible to achieve this feat, usually enemies will often produce another weapon such as a backup sidearm and continue to try and kill the player. On some occasions, if a weapon is successfully shot out of an opponent's hand, they will hold their hand in pain. They can still be killed or hogtied with the lasso (the player will receive no bonus for doing this) after the duel, but if not dealt with on the spot, the loser will often flee the scene.

As with other Stranger tasks, there is no penalty to honor if a player chooses to ignore a random challenge entirely.

In Red Dead Redemption 2, dueling is uncommon, although it does appear in some missions - most notably "The Noblest of Men, and a Woman".

In free-roam, the player can only be challenged to a duel in Valentine and Van Horn Trading Post. In both places, two men can be seen entering a standoff, and the winner will challenge anyone else to duel him. At this point, the player may accept their challenge, and initiate a duel with them.

Additionally, in Valentine, the player may be challenged to a duel by a drunkard, if they bump into him when entering Smithfield's Saloon. This time, however, the drunkard will pass out as soon as the standoff begins, and no duel will be fought.

At the Rhodes Saloon, the player might encounter a man named Willy Curlls, who is bragging about their quick draw and the player can challenge him to prove it. If the player wins the duel by disarming then his "friend" will thank the player for finally shutting the braggart up.

During the second event at the Central Union Railroad Camp, Arthur has to fight a duel against Ferdinand Newman, a man commissioned by Leviticus Cornwall to occupy a piece of land in order to stop the construction of a rail connection. Upon winning the duel, the player is required to collect Newman's property deed and give it to the railroad foreman, Percy Whitsickle, so the construction can continue.

The player is also required to enter a duel with Joshua Brown during his bounty mission. However, due to Brown being wanted alive, the player must disarm him or shoot him in the leg to prevent a mission failure.

When the duel begins, lightly press RT/R2 (or press and hold RB/R1 if triggers are flipped) to charge the duel meter. When it is full, the player can take their shot. The player can also "cheat" to win duels. In order to do this, partially charge the duel meter and then take the shot manually. This method is faster and the player will be more likely to win the duel. However, unless it’s in the side mission "The Noblest of Men, and a Woman", the player will lose Honor for doing this.

You can also win duels via disarming your opponent. In order to do this, aim for the opponent's gun or hand, and take the shot. Doing this will reward the player with Honor. The player should be aware, however, that disarming the opponent will not gain the player Honor if it is done in the mission "The Noblest Of Men, and a Woman". Furthermore, disarming opponents in this mission will lead to different results - if Emmet Granger is disarmed, he will attack the player with a knife, if Billy Midnight is disarmed, he will laugh and eventually commit suicide, and if Flaco Hernández is disarmed, he will take out a Sawed-off Shotgun and begin shooting at the player. It is impossible to disarm Jim "Boy" Calloway. Conversely, in the duels against Jamie Gillis and Joshua Brown, the player must disarm them. Failing to do so will cause the respective missions to fail.

Opponents in duels will generally die from a single shot (as long as it’s in a fatal area, such as the head or torso), regardless of what weapon is used. The only opponent who may not die from a single shot is Flaco Hernández. During the duel with him, it is advised to either aim for the head or, preferably, shoot twice. If the player does wish to shoot more than once, they should press the "shoot" button multiple times. The number of shots the player can fire depends on the ammo capacity of the weapon they are using.

Duels may also vary slightly in difficulty. Opponents from the mission "The Noblest of Men, and a Woman" will be slightly faster than opponents in free-roam. Jim "Boy" Calloway is the fastest opponent in the game, and the player will have to "cheat" in order to beat him.

In free-roam only, the player may also refuse duels. Doing so will reward them with Honor.

In Red Dead Online, dueling is not a standalone activity as such, although two players can duel each other in a relatively similar fashion to duels in Redemption and Redemption 2's single player modes, by standing a short distance away from each other and drawing once a third player fires their gun in the air. Fanning the hammer is the most common method for dueling.

Also, a random encounter, in which two non-player characters duel can occur in Valentine, Rhodes and Annesburg.

Marston and his opponent ready to draw.

John Marston disarming an opponent in a duel.

John Marston dueling Müller, during the "Lucky in Love" mission

Arthur and Ferdinand Newman in a duel