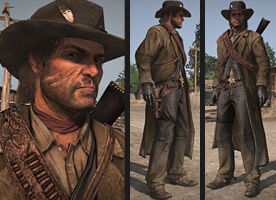 The Duster Coat is an outfit found in Red Dead Redemption.

It is a worn, dark brown, oil skin duster. This type of coat was usually worn by deputy lawmen of the time, likely the reason for its requirements, seen below. It was also a popular choice for bounty hunters.

This outfit is obtained after reaching the honor rank of "Peacemaker". The Duster Coat appears to simply be worn over John Marston's standard Cowboy Outfit.

John Marston and gang prepare for The Assault on Fort Mercer. 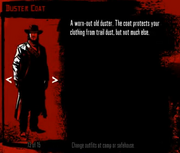 Retrieved from "https://reddead.fandom.com/wiki/Duster_Coat?oldid=419087"
Community content is available under CC-BY-SA unless otherwise noted.