“Single stick of dynamite. To time the blast, hold it while the fuse burns. Watch the sparks; don't let the fuse burn long.”

It is a versatile tool in the late period of the American west, and a powerful weapon in Red Dead Redemption. Used in demolition and mining, dynamite has also found much use among outlaws who create improvised explosive weapons to cause carnage and chaos among enemies.

Marston can use dynamite as a weapon against groups of foes, to ambush stagecoaches and armed convoys and to assault enemy positions.

Dynamite is used as a thrown weapon in both Red Dead Revolver and Red Dead Redemption. Due to its powerful explosion, it is best to throw from a certain distance or from behind cover to ensure that you are not injured or killed from the blast. It will take 5 seconds to explode once the fuse has been lit. This can be used to time the throw to make it explode at different distances, or to do a suicide run near an enemy. The fuse will be reset once the player stops aiming. An interesting way to use dynamite is to activate dead-eye targeting in single-player and mark the target in the center of the screen. The dynamite will be thrown as usual by Marston, but will hone in on its target, appearing to be thrown normally, but when about a foot off the ground it will then fly towards its chosen target. However, the fuse will continue to shorten even during Dead Eye, so one needs to watch out or they might accidently kill themselves.

If a player hits an enemy in the head with a stick of dynamite, they will die instantly.

Dynamite chests are present in certain Gang Hideouts, settlements, multiplayer competitive maps, and co-op missions. These will explode when shot with a firearm and can therefore be used to take out nearby enemies. Conversely, the player must be cautious to avoid the vicinity of these chests when enemies are around.

Note: If the player is using the Invincibility cheat, this can be an effective and comical way to kill characters; it functions as a sort of "suicide-bomb" strategy, despite the player not being able to die. 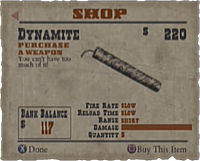 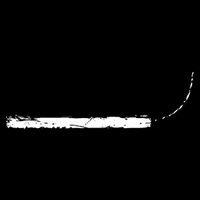 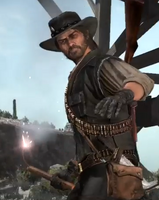 John Marston holding a piece of dynamite with a lit fuse.

Pig Josh with Dynamite
Add a photo to this gallery

Using Dynamite in Multiplayer while wearing the Pig Josh character model contributes toward acquisition of the following Achievement/Trophy:

Retrieved from "https://reddead.fandom.com/wiki/Dynamite?oldid=373096"
Community content is available under CC-BY-SA unless otherwise noted.