Eagle Flies later rides into Beaver Hollow with the majority of the younger members of his tribe, and asks the gang to join him in an attack on the Cornwall oil refinery. Rains Fall rides up and begs them not to attack the US Army, but Eagle Flies defiantly brushes off his father's concern and rides away with his men. The gang decide to follow him and arrive at the refinery to find the Indians scattered, with Eagle Flies fighting for his life at the center of the oil fields. Arthur leads Sadie, Charles, and a group of the Indians to rescue him. After they meet, Eagle Flies tells them that they must save every Indian they see.

After most of the soldiers had been defeated, Dutch and Arthur enter the warehouse to find the state bonds. While the two are about to exit the warehouse, soldiers attack them. A pipe bursts while Arthur is escaping, leaving him incapacitated, which results in Eagles Flies charging in and slaying the three soldiers about to kill him. Then, Colonel Favours appears and mortally wounds Eagle Flies with a shot to the abdomen, before he is himself shot and killed by Arthur. Arthur, Paytah, and Charles then bring the mortally wounded Eagle Flies back to his father at the reservation, and he dies in Rains Fall's arms shortly afterwards.

After fleeing to Canada, Rains Fall periodically returns to the Wapiti's ancestral homelands to pay his respects to Eagle Flies. During an encounter with John Marston in 1907, Rains Fall reveals that he is still mourning for Eagle Flies all these years after his death.

Eagle Flies is a prideful and reckless young man who is greatly angered by the injustices his tribe is subjected to by the Army, whom he has deemed dishonorable as they had been paid off by Leviticus Cornwall to force the Indians off the reservation lands, which are supposedly oil-rich. In response to these grievances, Eagle Flies came to believe that war with the Army is the only solution open to the tribe, believing in the glory in death and valuing the old warrior ways of the Wapiti, while outright rejecting the pacifistic values Rains Fall desperately tries to hold onto.

However, this, coupled with his anger towards the Army, left Eagle Flies vulnerable to being manipulated by Dutch, who had wanted to use the Wapiti as a distraction in order to divert attention away from the gang. Arthur, having become wary of Dutch's increasingly erratic leadership, had come to realize this and reflected this on his own past with Dutch. Due to his pacifism, Rains Fall, while understanding the blight his tribe faces from decades of abuse by the Army, came to believe that he is a disappointment to Eagle Flies.

This eventually came to a head when Eagle Flies and a large group of his tribesmen decided to mount an assault on the Heartland Oil Fields, even asking the Van der Linde gang to ride with them. Despite the Rains Fall's pleas for his son to stand down, Eagle Flies stated that his father's words "mean nothing" to him and nihilistically carried out the attack, in which heavy losses were sustained. Towards the end of the battle, Eagle Flies saves Arthur from being killed by the Army, only to be killed by Colonel Favors himself.

In the end, Eagle Flies had not regretted saving Arthur, and he was but another person used by Dutch who ended up losing his life in the process. In what could perhaps be seen as ironic, Eagle Flies' death meant that he never accompanied his tribe in moving to Canada or suffered the hardships they faced there. Instead, he ultimately sacrificed himself for Arthur, gaining the honour and glory in death that he had always wanted. 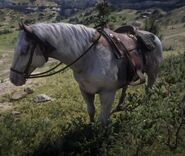 Visiting the grave of Eagle Flies
as John Marston, 1907

Retrieved from "https://reddead.fandom.com/wiki/Eagle_Flies?oldid=386430"
Community content is available under CC-BY-SA unless otherwise noted.