During the bank robbery in in Saint Denis, Ross is seen by Milton's side when he captures and executes Hosea Matthews outside Lemoyne National Bank, ensuing a shootout.

With Williamson and Escuella dealt with, Ross and his partner in the Bureau, Archer Fordham, are still unsatisfied. They then directly work with Marston in the Blackwater area to help him track down his former gang leader and mentor, Dutch van der Linde. After rescuing their informant, Nastas, from the Wreck of the Serendipity and attempting to prevent Dutch and his gang from robbing the Blackwater bank, Ross decides to launch a final dramatic assault on Van der Linde's camp with the assistance of the U.S. Army. During the assault, Marston eventually corners Dutch. Dutch chooses to commit suicide by throwing himself from a cliff, declaring to Marston that their time is up, a reference to the federal government's manipulation and the pursuit of them, and foreshadowing Ross's betrayal of Marston.

Three years pass, and Ross continues working in Blackwater under the Federal Bureau, until retiring in 1913. During this time, Abigail dies of unspecified causes and Jack grows into a nineteen-year-old man. His change in appearance and talent with a gun suggests that he has been training extensively to be more like his father and to avenge his death.

After paying respects and mourning at the graves of John, Abigail, and Uncle, Jack returns to Blackwater. At the train station, he runs into Howard Sawicki, a younger Bureau agent, and inquires about Edgar Ross. He learns that Ross had received a "chest full of medals", and that he retired to a small cabin with his wife on Lake Don Julio in Cholla Springs, New Austin. Despite his retirement, however, it is apparent that the Bureau still hounds Ross for work due to his level of fame within their organization.

Ross advocates federalism and acknowledges the hypocrisy of his methods as necessary, displaying an 'end justifies the means' attitude to law enforcement. Ross views himself as someone who enforces the rules and explains to John that the alternative outcome to having rules in civilization is simply "hell". Even though Ross admits the potential corruption of law enforcement, he still views himself and the agency as more justified than the outlaws they hunt, namely Dutch van der Linde. While Ross places the agency on a higher moral high ground than outlaws, he himself doesn't seem to be motivated by any morally justifiable reasons. Throughout Redemption, Ross is only concerned with achieving personal glory and even mocks the citizens of Blackwater by calling them "scum" while berating John Marston. Ross' disdain for outlaws is also shown in Redemption 2, when he mockingly tells four-year-old Jack Marston to enjoy his fishing when he still can, just for the sake of it.

As of 1907, Ross' appearance has been altered slightly. He has aged although it doesn't appear by much with what appears to be small amounts of grey in his now middle parted hair. He is not seen a bowler hat, and instead wears an ascot tie, a crimson opulent vest with a chain, black riding gloves and an equally dark frock coat.

By 1911, Ross has aged considerably. His hairline has receded and his hair and mustache have completely grayed. He also appears to be shorter, presumably a result of his increasing age. He wears a three-piece suit, consisting of a beige dress jacket with a grey vest and a white shirt beneath, all while sporting a red tie and a brown bowler hat.

In 1914, Ross' appearance is the same. However, his attire has changed since his retirement, now consisting of an off-white shirt with beige suspenders along with a red bandanna and wide brimmed hat. 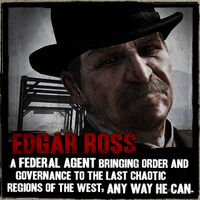 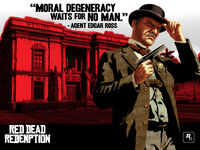 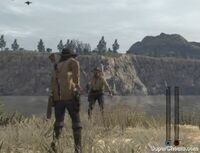 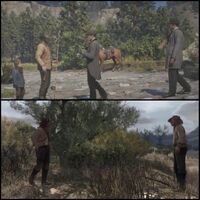 Retrieved from "https://reddead.fandom.com/wiki/Edgar_Ross?oldid=400125"
Community content is available under CC-BY-SA unless otherwise noted.