Edgar Watson is the son of Mama Watson and a member of the Watson Boys. At some point, he managed to escape from jail mere hours before he was set to be executed by hanging.[1]

Some time after Arthur interacted with and, optionally, robbed Mama Watson, Edgar and his brothers visit their mother to tell her about trying to use the money they get from their criminal exploits to move her out of the country. She will express disinterest in the plan before verbally berating the brothers.

If Arthur attempts to enter the house, the brothers will attack him, and he has the option of killing them all, subduing them, or simply running away. 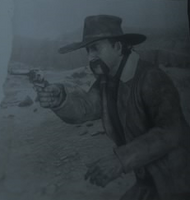 Edgar on a photograph in Mama Watson's scrapbook