Edith is the wife of Thomas Downes and the mother of Archie Downes.

Edith's husband, Thomas, began having financial problems, so he obtained a loan from Leopold Strauss. However, he was unable to repay the loan, leading to Arthur Morgan being sent to the ranch by Strauss, in the hope of forcing Thomas to repay his debt. He is continually beaten by Arthur, who ignores Downes' claims that the family is destitute. Edith then intervenes, reasserting that the family has no money and informing Arthur that Thomas is ill. Disappointed at what little his trip to the ranch had achieved, Arthur then leaves the property and reports back to Strauss.

Soon afterward, Thomas Downes dies from his tuberculosis. In turn, Strauss simply bequeaths the debt to her, meaning that she, too, would owe money to Strauss. Arthur later returns to collect the last of the loan from her, and Edith gives him the money with no incident, but not before cursing him. She and her son pack up and leave the homestead, intending to start a new life elsewhere.

Edith and her son become financially unstable, resulting in Edith becoming a prostitute in Saint Denis to support her and Archie. Accidentally, she offers prostitution services to Arthur in town. Arthur recognizes her, and she subsequently recognizes him, causing her to inform a policeman that he was "harassing" her. Arthur is then chased away by the police.

She and her son eventually move to Annesburg, a thriving mining town. Arthur encounters her in the town and notices her bring a client into her home, but she sees Arthur and storms off, abandoning her client. Later, Arthur searches for her and finds her trying to get potential clients. She tells him to go away and Arthur tells her that he is sorry for what he did and wonders where her son is. She tells him that Archie is probably working in the mines, and also that Archie's foreman and other miners dislike Archie. Arthur offers to fix the problem, but she tells him to get lost.

After Arthur saves her son from being bullied by the miners, Archie tells him that his mother refused Arthur's money and has not stopped being a prostitute. Arthur finds her talking with a client and promptly scares him off. He tells her that he feels bad for what he did and that she shouldn’t let her pride consume her, persuading her to leave and go home to Archie. She then agrees to come with him but says that she does not want to forgive him, which Arthur understands. She hugs her son and wonders what she and Archie will do. Arthur again offers to give them money and tells them to use it to help them start a new life somewhere. He tells her that he is not looking for forgiveness and he has not forgiven himself for what he has done. She takes his advice and eventually accepts Arthur's money, before she and Archie head inside the house. Edith forgiving Arthur can be one of the lines he reflects upon during his last ride.

In 1907, Edith and her son are seen boarding a ship in the Saint Denis harbor, their appearances implying they are wealthier than before. Additionally, the Downes family had begun opening a brand new golf course and owning several successful businesses out west.[1] 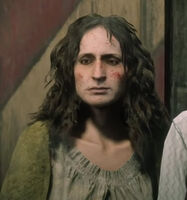 Edith during "Do Not Seek Absolution" I & II