Lucky's Cabin in The Heartlands, State of New Hanover

Edmund Lowry Jr. is a minor character featured in Red Dead Redemption 2. He is the subject of the Stranger mission "American Dreams".

Edmund Lowry Jr. is a serial killer who strings up the desecrated and mutilated corpses of his victims throughout New Hanover, Big Valley and Lemoyne, leaving clues that can be pieced together into a map to his hideout, a cabin southwest of Valentine.

After finding all three clues from the crime scenes, the player can go to Edmund's basement, which is filled to the brim with murder weapons and the remains of various victims, some nothing but polished skulls while other fresh and stretched open carcasses. Also proudly strung up on the walls are newspaper clippings describing the many disappearances and serial murders he had commited.

After inspecting a knife at the back of the basement, Edmund sneaks up on the protagonist and knocks them out, taunting them with threats of torture as they lie dazed. However, the player manages to throw a severed head at him, and beats him into unconsciousness. The player then ties him up and takes him to the Valentine jail as a de facto bounty.

Upon waking, Edmund pretends to surrender as he is escorted into his cell, but suddenly attacks Sheriff Malloy the second his restraints are undone.

If the player decides to intervene: With the Sheriff on the ground desperately trying to defend himself, the player shoots Lowry Jr, killing him and saving Malloy. The Sheriff is shaken but grateful, and rewards the player with $20.

If the player decides not to intervene: Malloy eventually manages to force Lowry Jr. off and shoots him in the chest when he’s on the floor next to him. Angry that the player did not assist him, Malloy doesn’t pay them and asks them to get out.

News of Lowry Jr.'s death is subsequently reported in the newspaper.

Edmund's death, after being shot by Sheriff Malloy 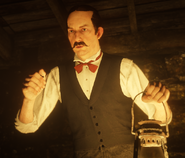