Ability to Cheat at Poker

The Elegant Suit is an outfit available to be worn by Marston in Red Dead Redemption. This outfit is one of the nine required for the 100% game completion statistic.

It is discovered when the player first initiates a game of poker or enters the tailor's shop in Thieves' Landing. It can then be bought at said location for $70.

Wearing the Elegant Suit allows the player to cheat in poker by allowing them to stash an extra card. The player can stash a card every time it's their turn to deal the cards, by pressing either the triangle or Y button. Stashing it initiates a mini-game where the player must keep an arrow balanced. If the arrow becomes unbalanced, an NPC will notice the player cheating.

Fashionably dressed John Marston holstering his revolver after a battle. 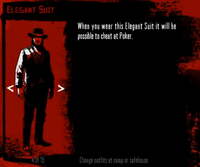 John riding a horse with style

Original description page photo; note the lack of a hat

Destroying a train and looking good while doing so

Despite its description, the player can’t cheat at Liar's Dice. 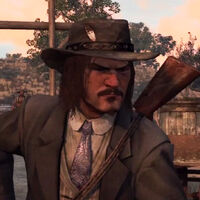 Beta John wearing the Elegant Suit, without the hat

Obtaining the Elegant Suit will contribute toward acquiring the following Trophies/Achievements:

Also, obtaining the Elegant Suit will contribute toward acquiring the following Trophies/Achievements: