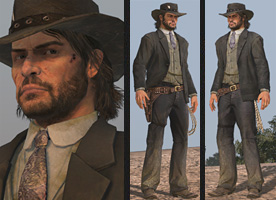 The Elegant Suit is an outfit available to be worn by Marston in Red Dead Redemption. This outfit is one of the nine required for the 100% game completion statistic.

It is discovered when the player first initiates a game of poker or enters the tailor's shop in Thieves' Landing. It can then be bought at said location for $70.

Wearing the Elegant Suit allows the player to cheat in poker by allowing them to stash an extra card. The player can stash a card every time it's their turn to deal the cards, by pressing either the triangle or Y button. Stashing it initiates a mini-game where the player must keep an arrow balanced. If the arrow becomes unbalanced, an NPC will notice the player cheating.

Fashionably dressed John Marston holstering his revolver after a battle. 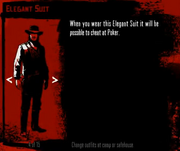 John riding a horse with style.

Original description page photo; note the lack of a hat.

Destroying a train and looking good while doing so.

Despite its description you are unable to cheat at Liar's Dice. 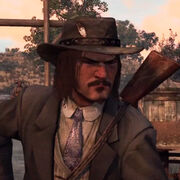 Beta John wearing the Elegant Suit, without the hat.

John
Add a photo to this gallery

Obtaining the Elegant Suit will contribute toward acquiring the following Trophies/Achievements:

Also, obtaining the Elegant Suit will contribute toward acquiring the following Trophies/Achievements:

Retrieved from "https://reddead.fandom.com/wiki/Elegant_Suit?oldid=359931"
Community content is available under CC-BY-SA unless otherwise noted.