With the addition of the Myths and Mavericks DLC pack, Deputy Eli is also a multiplayer character model that may be selected in the "Revolution" section of the Outfitter.

Eli is one of Marshal Johnson's deputies, and is the spotter of Bollard Twins Gang in the second mission that the Marshal gives John. Eli is overweight, possesses a lazy-eye and a strong Southern accent.

Eli is competent with a weapon, as demonstrated in his missions alongside John Marston. Eli has also demonstrated competence in policing duties, being the one to spot the Bollard Twins Gang in Pike's Basin. He is also very strong, getting one of Bill Williamson's men to talk with just one punch to the chest. Eli's dedication to his job and his honesty despite his awkwardness makes him an unlikely asset to the Marshal - these are qualities in short supply in Armadillo.

Eli fights alongside John Marston in the missions "Justice in Pike's Basin", "Spare the Rod, Spoil the Bandit", "Hanging Bonnie MacFarlane", and "The Assault on Fort Mercer". Eli is normally accompanied by Marshal Johnson and Jonah. 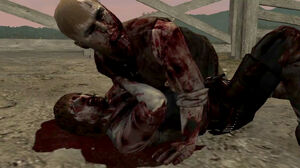 Eli appears in the side-mission "Dinner For Two". Marshal Johnson explains that he sent Jonah and Eli out into town, likely to watch over the survivors. Unfortunately, it would seem Eli became infected before turning on Jonah, devouring him. 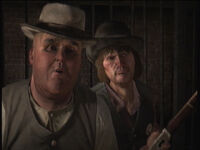 Eli In The Marshal's Office.

Eli Zombie
Add a photo to this gallery

Retrieved from "https://reddead.fandom.com/wiki/Eli?oldid=397228"
Community content is available under CC-BY-SA unless otherwise noted.