Elias Green is a minor character and a bounty target featured in Red Dead Redemption 2.

A member of the Skinner Brothers gang, Elias Green is wanted by Blackwater Police Department for the murder and mutilation of six travellers near Manzanita Post.

John Marston can claim Green's bounty and hunt him down. He can either kill Green and bring him in dead, in which case his corpse is dumped behind the police station, or capture him alive, where Green is imprisoned and publicly hanged in Blackwater soon afterwards. 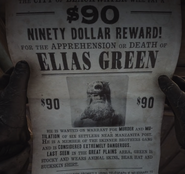 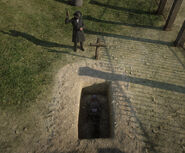