Tall Trees
“Talking of adventure, how'd you like to learn how to track elk? Really big ones in the valley this time of year. We could use the meat.”

Elk are the largest species of deer found in the game. Their antlers grow up to 4 feet long, and can weigh up to 40 pounds. Elk are prized by hunters for their hides and meat, which is low in fat and high in protein. Known predators are grizzly bears, wolves and cougars. They average about 6 feet tall, and typically weigh around 800 pounds. The elk is a passive animal, and will flee as soon as it detects the player, or a predatory animal. They are easy to spot, due to their sheer size and antlers that reflect the sunlight, and will either be brown or a lighter grey color. The player should also listen for their distinctive high-pitched bugling sounds that occur in long notes, or in short, quick notes, like chirping.

Elk can be found in the general area of mountains and forests of West Elizabeth. More specifically, they can be found around:

During the mission "John Marston and Son", John and Jack Marston go out to hunt elk in Tall Trees.

Rank 7 of the Master Hunter Challenges requires the player to kill and skin 5 elk.

Video with one of the best locations for elk hunting. 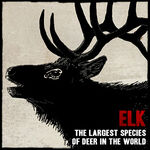 3D model of the elk

The player must kill an elk to successfully complete the following achievement: