Cumberland Falls in The Heartlands, State of New Hanover

Sometime before the year 1899, Swan murdered her mother and several husbands. The Valentine Sheriff's Office suspected her of committing the murders and subsequently placed a bounty on her head. This resulted in her being wanted alive for questioning.

In Valentine, after capturing Benedict Allbright, the player finds a poster in the Sheriff's office for Ellie Anne Swan, promising $25 for her apprehension.

The player then goes to the Cumberland Falls area, where she was last sighted. After arriving, Swan tells her lover to attack the player, and denies being the infamous "Black Widow" when the protagonist calls her out as being such. Her lover instead tells her that she should go with the player, correctly suspecting who she really is, but this causes her to stab him with a dagger, killing him. She then tries to attack the player, but they manage to subdue her with a lasso before putting her on the back of their horse and heading for Valentine. Alternatively, the player may lasso Ellie Anne Swan before she is able to kill her lover but this will cause the lover to pull out a revolver and start shooting. After hog-tying both Ellie and her lover, he is upset that she has turned him into an outlaw as well, although if you try to turn him into Sheriff Malloy you will become wanted and fail the mission. Untying the lover afterwards he just runs away.

Along the way, Swan tries to convince the player to let her go, even trying to convince him to run off with her. However, the player simply ignores her and brings her to the Sheriff. While delivering her to her cell, the protagonist tells the sheriff that she killed another of her lovers, before collecting the reward money and exiting the office. Similarly, if she doesn't kill her lover, the protagonist will say something like "Good thing the poor bastard she was with didn't end up like her husband."

Ellie is a slender young woman, with long red hair and brown eyes. Ellie wears a blue hat with pink feathers, a white blouse with a necklace, a dark blue long skirt, a long gray socks, and black boots. 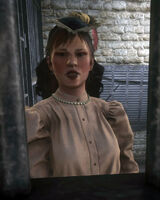