Emmet Granger is a minor character featured in Red Dead Redemption 2. He appears in the Stranger mission "The Noblest of Men, and a Woman".

Emmet Granger is a retired gunslinger-turned hog farmer. In 1882, he was reported to be seen during a massacre in Beaver Brook. In 1886, he was rumored to have been involved in the Laidlaw family disappearance. In 1890, he was a suspect in The Chaparral killings. In 1894, he was a witness that lead to the Fosse gang arrest. The following year, he was given a federal pardon and acquired some land to become a hog farmer.

The player is sent to track down and potentially interview Emmet Granger for a book about Jim "Boy" Calloway. Granger lives near Flatneck Station on a small pig farm. When asked for a quote about Calloway, Granger becomes irritated that the book isn't about him instead. He says that he is too busy taking care of his pigs to do an interview, but changes his mind and promises to share some "stories" if the player cleans the manure out of his pigsty. During this task, Granger briefly recounts his cruel deeds but refuses to account any specifics of Calloway. The player then demands information about Calloway, but after their request is refused, they take a stick of dynamite lying on a table and plant it in the manure heap, before setting the stick alight. As a result of the explosion, Granger is coated in hog manure and mocked by the player. Enraged, he then challenges the player to a duel, resulting in his death. The player subsequently takes a picture of Granger's corpse and departs.

Later on, the player gives Theodore Levin the picture of Granger's corpse. Levin uses it in his book about Calloway, writing that he was the one who had slain Granger.

The duel with Granger is unique in that he uses a throwing knife rather than a handgun. This is advantageous for the player for the most part, because the knife throw will be cancelled in the air when Granger is killed. This gives the player more time, as they can potentially shoot after the knife has been thrown and still win the duel. However, Granger turns side-on when he throws his knife, making him a narrower target and therefore slightly more difficult to hit.

Since the player will not lose Honor in duels against the retired gunslingers during "The Noblest of Men, and a Woman", the best way to beat Granger is by cheating: players should only partially charge the draw meter, to make sure they do not miss, before shooting. Otherwise, they could immediately activate Dead Eye, manually adjust the aim, and then shoot. Regardless of where he is hit, Granger will die from a single shot.

Alternatively, Granger can also be disarmed. This is not recommended, however, as he will then draw another knife and charge against the player. In addition, the player will not gain Honor from this due to the duel being part of "The Noblest of Men, and a Woman". 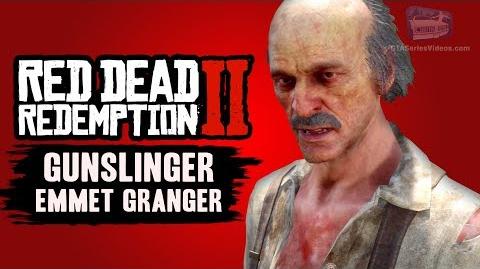