Enepay is a minor character featured in Red Dead Redemption.

Enepay is a Native American and a member of Dutch's Gang.

Enepay is encountered during the mission "For Purely Scientific Purposes", in which he, along with Kosumi and Hinto, meet with Nastas, John Marston, and Professor Harold MacDougal. After a brief exchange of words, Enepay shoots and kills Nastas after accusing him of being a traitor, causing Marston to shoot him and some of his comrades in turn, killing them all in revenge for Nastas' death. 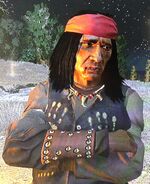