Enter, Pursued by a Memory is a mission in Red Dead Redemption 2.

John Marston has not returned from an earlier scouting trip. Arthur Morgan and Javier Escuella ride out into the snow to look for him.

Abigail Roberts is concerned with the safety of John Marston, who hasn't been seen in days since going on a scouting mission. She asks Arthur and Javier to find him.

Arthur and Javier ride together, and soon Javier spots a camp in the distance and speeds up. After riding for a while, the pair come across John's horse, frozen to death. Javier fires his gun to see if John hears, and in the distance, he can be heard calling out for help.

Arthur and Javier leave their horses and continue on foot, climbing around several ledges. They find John injured and bloody and carry him back to the horses, being attacked by three wolves, which Arthur kills, on the way.

As Javier and Arthur ride back down, Javier spots another group of wolves and spurs his horse into a gallop. Arthur kills the wolves, and there are no more wolf attacks for the rest of the journey. Upon arriving at the gang's camp, John is carried inside whilst Abigail berates him.

Enter, Pursued by a Memory/dialogues 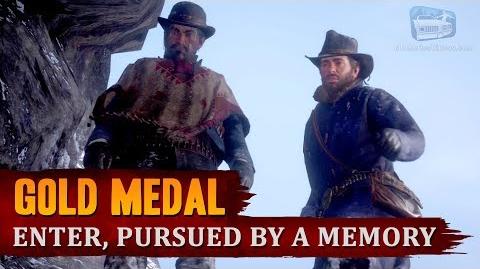 Arthur and Javier searching for John

Javier riding with Arthur seen in the background

Arthur and Javier searching for John on foot

Javier climbing the ledge with Arthur

John on horseback with Javier

Retrieved from "https://reddead.fandom.com/wiki/Enter,_Pursued_by_a_Memory?oldid=416509"
Community content is available under CC-BY-SA unless otherwise noted.