Esteban Cortez is one of the leaders of the Del Lobo Gang. He has is wanted Dead or Alive by the Tumbleweed Sheriff's office for murdering lawmen, as well as robbing stagecoaches and trains. He has a bounty of $65.

Esteban has a bounty on him at Tumbleweed. He can be found hiding out at Gaptooth Breach after the imprisonment of his brother. John Marston can take up this bounty and kill his guards, while taunting him about capturing his brother. Cortez is either killed by John and brought in dead, or captured alive and jailed in Tumbleweed. 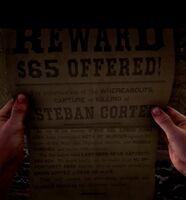 Esteban’s bounty poster.
Add a photo to this gallery

Retrieved from "https://reddead.fandom.com/wiki/Esteban_Cortez?oldid=377352"
Community content is available under CC-BY-SA unless otherwise noted.