Exhuming and Other Fine Hobbies/dialogues

Exhuming and Other Fine Hobbies is the thirteenth mission in Red Dead Redemption.

John Marston meets Seth Briars in the cemetery of Coot's Chapel exhuming bodies, particularly the one of Josephine Byrd, looking for valuables. Seth reveals that his partner has the other half of his treasure map. They travel to Benedict Point and Seth needs John to lure two deputies away from the jail, so Seth can break in and get to his old friend, Moses Forth.

When this mission starts, all the player needs to do is to ride to Benedict Point with Seth where he will instruct the player to steal one of the lawman's horses (you could also just walk up to the lawmen and the game will consider it trespassing). Simply do so and evade the pursuing lawmen. This is best done by using the roads to gain speed and then lose them in the wilderness.

"Goodbye, John Marston, it's been a great pleasure."

"Let me be frank for one second, partner. I hate people. It was people who got me in this mess in the first place!"

"What happened? My partner! He stole half my map! I never would have done that to him! Never! Look at me!"

"Great job getting rid of them clowns. Now keep an eye out in case they come back."

"Get the hell away from me!"

"You've always been a twisted little freak! I ain't tellin' you shit!"

"Then I'm gonna cut you up, piece by piece! Until you find your tongue..."

"Friend, this man has gone crazy in the sun. I suggest you take my advice and start talking."

"Shut up, Marston! I wanna cut into a bonafide man's flesh. Ain't never cut into a live one before!"

"I think you've gone and pissed yourself, Moses."

"Don't worry yourself with 'thanks', Seth, just help me when I come askin'."
Add a photo to this gallery 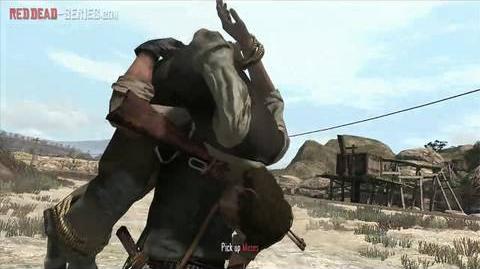 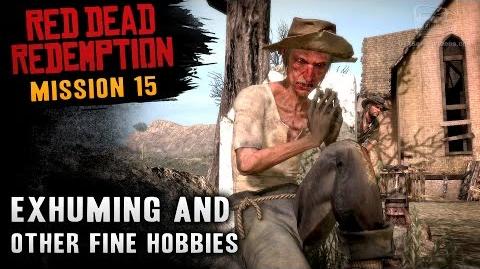 Retrieved from "https://reddead.fandom.com/wiki/Exhuming_and_Other_Fine_Hobbies?oldid=399151"
Community content is available under CC-BY-SA unless otherwise noted.