Exit Pursued by a Bruised Ego is a mission in Red Dead Redemption 2.

After spotting a huge bear up by the Dakota River, Hosea and Arthur ride out and track it.

Hosea tells Arthur in camp he plans on going hunting. Arthur agrees to go with him, and the two decide to take a horse to Valentine to sell. After Arthur sells the horse, he can buy a new horse. Arthur and Hosea then set out for Grizzlies East, where a Legendary Bear is located. On the way, the two make camp and cook rabbit. In the morning, Arthur crafts bait, and the two set out. After reaching their location, Arthur tracks the bear to a small area in between two large rock formations. The trail ends, and they set the bait. When the bear doesn't appear, they check it, but the bear appears in front of them. Arthur shoots the bear multiple times with his revolver, and it flees. After checking on Hosea, Hosea states that he's heading back to camp. Arthur can decide if he wants to stay or go back to camp with Hosea. 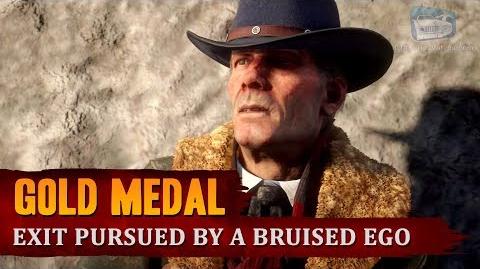 Retrieved from "https://reddead.fandom.com/wiki/Exit_Pursued_by_a_Bruised_Ego?oldid=415934"
Community content is available under CC-BY-SA unless otherwise noted.