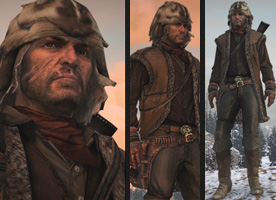 The Expert Hunter Outfit is an optional appearance for Marston in Red Dead Redemption available alongside the Savvy Merchant Outfit via the free Hunting and Trading Outfits Pack DLC or with the Game of the Year Edition.

With this outfit, Marston trades in his cowboy hat for a unique badger skin hat, along with a button-up leather shirt underneath an animal skin vest. His red bandana is unfurled, and he wears a pair of pinstripe pants tucked into boots.

While using this outfit, players will receive double the amount of item drops from animals, excluding hearts and vittles. The outfit also allows the player to harvest an extra copy of all the legendary animal items, although the same rule applies to their hearts.

Five scraps must be obtained by completing challenges before the outfit is unlocked. The scraps can be obtained in any order.

John about to shoot a Deer while wearing the Expert Hunter Outfit.

John about to shoot a Cougar while wearing the Expert Hunter Outfit.

John about to shoot Brumas the Bear while wearing the Expert Hunter Outfit.

Hunting the legendary Jackalope with the Expert Hunter outfit

Retrieved from "https://reddead.fandom.com/wiki/Expert_Hunter_Outfit?oldid=404662"
Community content is available under CC-BY-SA unless otherwise noted.