“Attracting a swarm of insects wherever it travels, Famine's thin shadowy frame and crimson eyes mask an everlasting stamina.”

Famine is a mythical horse found in the Undead Nightmare DLC pack for Red Dead Redemption.

Famine is one of the Four Horses of the Apocalypse, along with War, Pestilence, and Death. The player can tame Famine in the wilderness.

Famine attracts a swarm of locusts, which follow it when it travels. It also has unlimited stamina like all of the Four Horses of the Apocalypse.

Famine is the fastest of the horses of the Apocalypse. This is more noticeable when traveling off-road. Caution: feeding horse pills to Famine will negate his infinite stamina. Famine is generally easy to find since it is usually near where the player first enters Mexico. 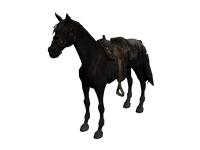 Famine and Pestilence.
Add a photo to this gallery

Retrieved from "https://reddead.fandom.com/wiki/Famine?oldid=373798"
Community content is available under CC-BY-SA unless otherwise noted.