“While there are guns and money, there won't be any freedom, Luisa.”

John Marston meets with a nervous Luisa Fortuna to discuss the future of the revolution. Luisa's father has been killed for treason, and she wants Marston to help fight in the revolution. Colonel Agustin Allende is sending reinforcements and supplies to fight against the rebels, and Abraham Reyes has asked that John stop them.

Get in the wagon with Luisa and either skip to destination or wait. Marston learns that they'll be using dynamite to destroy the supplies and kill the reinforcements.

Place the dynamite in a line on the road. The best way to do this is to stand beneath the Frontera Bridge, facing northeast, away from Escalera. Walk 5-10 paces from the bridge and place a charge. Then, continuing down the centre of the road, place charges every 15 paces. Head up to the detonator on the ridge once the player has marked all 5 spots. Once there, ready it and wait for the convoy. Next, simply wait for the convoy to pass over the dynamite. There will be two wagons and a few soldiers on horseback. Luisa will prompt Marston when to strike, but her prompts are not always accurate, and it is better to blast them when the player feels they are in the right spot. Make sure you manage to destroy both wagons and use the rest of the dynamite on the horses. Simply keep one till the end to make sure Marston gets the last one. If the player misses any of the horses or wagons, take out the Rolling Block (or a repeater/rifle) to shoot the driver/rider.

After a quick thank you, Luisa promises to repay the favor before leaving Marston.

John Marston gets a hostile greeting in the opening of Father Abraham. 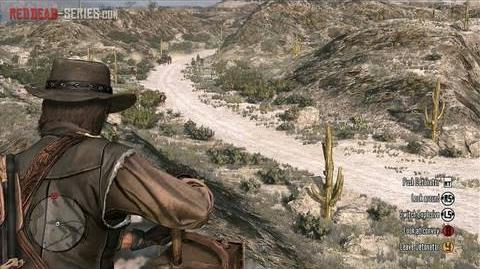 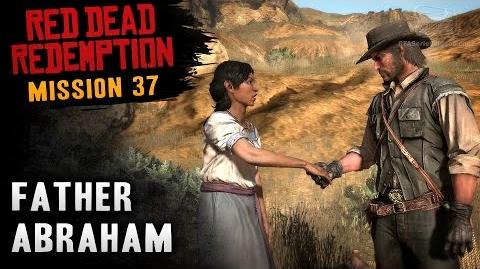 Retrieved from "https://reddead.fandom.com/wiki/Father_Abraham?oldid=388710"
Community content is available under CC-BY-SA unless otherwise noted.