Fatherhood and Other Dreams

N/A
Fatherhood and Other Dreams is a mission in Red Dead Redemption 2.

Mary asks Arthur for help with her father, who has become consumed by a gambling addiction. Arthur must retrieve a valuable family heirloom Mary's father has sold off.

Arthur receives a letter from Mary Linton, asking him to come and meet her in Saint Denis. Arthur later finds her at the hotel, and, after talking, she asks for help with her father. Arthur refuses at first, but eventually gives in and takes Mary to the stables to find him. Mary enters the stable to check on her father, leaving Arthur to wait outside. While waiting outside of the stable, Arthur threatens a young man for being disrespectful and annoying.

Mary soon comes out with her father, who is unhappy to see Arthur. Mr. Gillis walks off, and the two proceed to follow him; they soon watch him sell her mother's brooch for money to a loan shark named Ashton. Ashton offers give Mary's father a loan, but her father declines the offer. Mary confronts her father while Arthur chases after Ashton to get the brooch back. On horseback, Arthur chases the fleeing wagon and leaps onto it, throwing the driver off and hijacking it. Arthur takes the stagecoach to the swampland surrounding Saint Denis, and afterwards threatens Ashton to hand over the brooch. Some extra loot can be found in the lock box at the back of the wagon.

Arthur finds Mary again, who informs him that her father disappeared. When Arthur offers to find him again, Mary declines. After returning the brooch, the two begin walking to the trolley station. During their walk, Mary stops and asks Arthur if they could go to the theater. The player has the option to go with her or refuse her offer.

If Mary's request is accepted, they buy tickets into the theater and watch a number of acts. After this, the two make their way to the trolley station, where Mary asks Arthur to elope with her. Arthur states that he wants to, but the gang needs him. Despite this, Arthur agrees to come with her once he has some business dealt with. 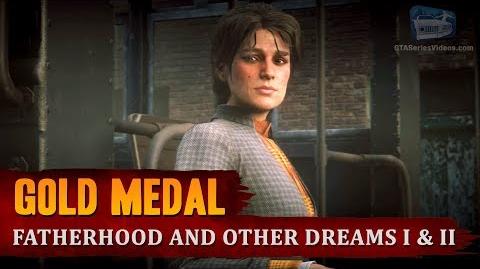