N/A
Favored Sons is a mission in Red Dead Redemption 2.

In order to draw attention away from the gang and onto the Natives, Dutch convinces Eagle Flies to ambush an army patrol.

Arthur speaks with Dutch and Eagle Flies. They plan to use dynamite to take several trees down to trap soldiers heading through the valley in order to humiliate them by tarring and feathering them. Arthur helps Dutch set up the dynamite; while doing so Dutch reveals his real intentions to Arthur; he plans to use the Natives to draw government attention away from the gang and onto the Natives, or in his own words "draw attention to one problem and a veil over the other". They take down the trees but the trapped soldiers aren't alone; more soldiers arrive and Eagle Flies is captured by the soldiers while Dutch and Arthur fight them off. They try to escape but find a dead end and a broken bridge, and are cornered on a cliff, where Dutch delivers a speech to the soldiers about how "my whole life, all I ever did was fight" whilst he and Arthur back away towards the cliff. They leap into the river below whilst being shot at by soldiers, and end up on the riverbank. 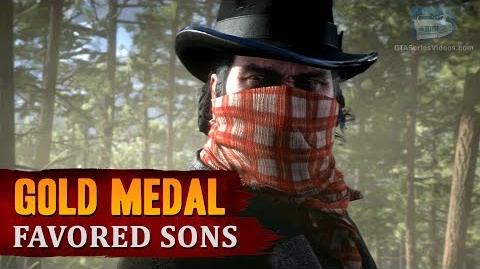 Retrieved from "https://reddead.fandom.com/wiki/Favored_Sons?oldid=412433"
Community content is available under CC-BY-SA unless otherwise noted.