Fidgits are dwarf clowns who are part of Professor Perry's circus crew. According to Sheriff Bartlett, the Fidgits were rumored to be the offspring of Pig Josh and the 'Bat Lady' of the circus. Once the Bat Lady left, they were raised by Professor Perry.

Fidgit is unlocked as a playable character in Showdown Mode by either completing the level "Carnival Life" on Bounty Hunter Mode or by purchasing the Napoleon statue from the General Store in Brimstone after completing "Freak Show". 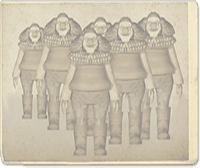 Retrieved from "https://reddead.fandom.com/wiki/Fidgit?oldid=416020"
Community content is available under CC-BY-SA unless otherwise noted.