Fists are a recurring weapon featured in all of the main Red Dead series.

Fists are used for hand-to-hand combat. When fists are equipped, the player can also perform kicks and other melee moves.

Fists can only be selected via the weapon inventory wheel, not from the pause menu, and can only be 'equipped' when the player is on foot, not riding a horse or vehicle.

Each time someone is knocked down (and stays down for a few seconds) it counts as a knockout. Even if the enemy gets knocked down multiple times they can still get up and fight.

Punching ordinary citizens with fists will not result in any loss of honor. If a lawman is hit it will result in a bounty. The only required use of fists in the main game's storyline is in the mission "You Shall not Give False Testimony, Except for Profit" where Marston has to defeat an angered Aquila in a fistfight to convince the crowd of the elixir's "miraculous" powers.

Fists are generally a last resort weapon, outclassed by just about any firearm, with the Hunting Knife being even better at close range combat. However, if you feel like knocking someone out without a bounty or loss of honor, or are just feeling a bit rowdy, then the fists are the perfect choice.

If Marston knocks out an enemy with a gun they will be disarmed. If this is the only weapon in their possession and Marston aims his weapon at them they may stand up with their arms raised in surrender and will not move until Marston either stops aiming his weapon or fires.

Getting the jump on someone makes knocking them out much easier. You can start immediately punching them before they even have a chance to retaliate, or you can just push them over and kick them, which can be done indefinitely as kicking them makes it impossible for them to get up.

Proper punching requires timing. The player should punch immediately after Marston pulls back his arm after landing a hit. Doing this while the target is blocking is ineffective, so if they block the first punch, they will most likely block the subsequent punches. Wait a few seconds before attempting to punch again. You can also attempt to counter after your opponent punches, which usually leaves an opening to land a hit. If the player moves towards their opponent while striking in hand to hand combat, they will hook. If the player doesn't move while striking, they will jab, and if the player is moving away from their opponent, they will upper-cut. Also, make sure not to accidentally hit a bystander or lawman, as a stray punch could add another person into the fight, making it much more difficult on your end.

Getting the prompt for a Ground Tackle usually appears after a successful combo of punches, which serves as a way to pile up even more damage on them, perfect after a combo. Once activated and on the ground, Marston will hold them by their collar with one hand and punch them with the other, sometimes using a back fist instead of a regular punch, although there seems to be no difference in damage. Usually at most you can land one or two hits, three if you're lucky, before they kick you off. Proper punch timing is also necessary to land at least two hits. The animation for a knockout while on the ground is Marston grabbing their shirt with both hands and slamming their limp body into the ground. Ground tackles can be cancelled by pressing Y while on the ground.

Keep in mind that all knockouts are only temporary, so NPCs will always get up and come back for more. With two or more opponents this can prove difficult, as an opponent you've already knocked out may get up and strike you while you're not looking, usually when you're trying to take out other NPCs.

Fighting with your fists can be useful when ammo is sparse, or to avoid drawing unwanted attention. It also works well when non-lethal methods are required, such as robbery or intimidation. Get up close and beat your enemies into submission, or incorporate a bladed melee weapon if you're out for blood.[1]

The player can also grab an enemy and beat them. While grabbed, not only can people be tipped unto the ground, but they can also be brought up into a vertical position using the same button (L3 on PS4).

If the player is standing close to a window or a table while grabbing an enemy, they may perform a melee finisher such as throwing them out of the window or smash their head into the table instead of just knocking them out. 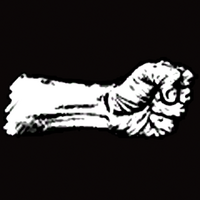 John about to punch De Santa