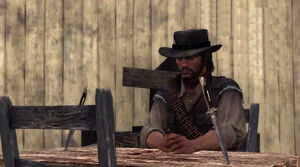 To play, the player places their hand palm-down on a table with his fingers spread apart. Using a knife, the player attempts to quickly strike the spaces between his fingers, while moving the knife back and forth, attempting to avoid injury. The higher the wager the user chooses the harder the pattern will be. The knife seems to be a larger version of the Throwing Knife.

This game is played competitively and cash is wagered on the outcome. The difficulty of the game increases with larger bets.

To collect a scrap of the Reyes' Rebels Outfit, you need to defeat all three opponents at Five Finger Fillet in Torquemada.

The game uses four specific patterns based on the bet amounts. For each opponent, the player gets five attempts in two rounds. Hitting the wrong button or completing the pattern too slow will result in the loss of an attempt. It's easier if you write out the pattern and not look at the game screen while doing the pattern.

Once you get the pattern down, it’s extremely simple. Betting $100 each round, you can make a hundred bucks in just a few seconds by skipping all of the cut scenes. Don’t forget that you’re timed, so do it as fast as you can. It should be noted that in the first two opponents, the player can't go too fast, even on the first two patterns.

For e.g. A,B,A,Y,A,B,A,X,A,B,A,Y (repeat another 2 times) and finish with A. This is for the hardest round of Five Finger Fillet you can play.

The patterns repeat multiple times, and always ends with the first button pressed (A or X depending on the system).

One easy way to complete Pattern 4 is to learn the basic order of button presses and then count to ten while tapping it out, beginning again at start of the pattern. Repeat this three times to win the round.

This game is found in 5 different locations throughout the map.

Five Finger Fillet returns in Red Dead Redemption 2. It can be found in 4 different locations around the world.

Winning games of Five Finger Fillet will contribute toward the following Trophies/Achievements:

Retrieved from "https://reddead.fandom.com/wiki/Five_Finger_Fillet?oldid=376904"
Community content is available under CC-BY-SA unless otherwise noted.