The Terror of the Grizzlies

Teddy Cañez
Flaco Hernández is a minor character featured in Red Dead Redemption 2 and a stranger in Red Dead Online.

He is one of the subjects of the Redemption 2 stranger mission "The Noblest of Men, and a Woman".

Flaco Hernández was an infamous outlaw and gunslinger who rode with a gang of 10 men. During his career, he launched many raids against Valentine, Strawberry, and Annesburg. His many criminal exploits led to him being wanted in eight states, and earned him his own nickname, "The Terror of The Grizzlies". By 1899, he was associated with the Del Lobo Gang.

The protagonist can encounter Hernández at the cabin located just east of Cairn Lake. When they enter, he will hold them at gunpoint before recognizing them as a prison escapee. After asking whether or not he can trust them, he will spontaneously fire a few shots just past them and laughs at their reaction. Subsequently explaining that he's heard some reassuring words about them, he enlists the protagonist to deal with a rival gang based out near Lake Isabella, promising to pay them for their assistance.

Afterward, Flaco can be found at Cairn Lodge again, and will offer paid killings, coach holdups, and horse/wagon theft missions to the player. Accepting his missions will decrease the player's honor.

The player is sent to track down and potentially interview Flaco for a book on Jim "Boy" Calloway. His camp is located around the frozen Cairn Lake in Grizzlies West. When arriving at the camp, the player encounters his gang, and a gang member will tell him to leave. The player can choose to either threaten them or try to defuse the situation. The gang allows the player to enter the camp or, alternatively, the player can kill the gang before meeting Flaco. The player then knocks on Flaco's cabin and tells him that they are here to ask him about Calloway. As long as the player has their weapons holstered, Flaco then leaves his cabin, spits, and says "Here's your message", while readying himself for a duel with the protagonist. Flaco is shot dead in the duel, and the player takes a picture of his corpse before riding away.

Later on, the player gives Theodore Levin the picture of Flaco's corpse. Levin uses it for his book about Calloway and credits him as the one who killed Flaco Hernández.

Flaco is a ruthless outlaw, who regards himself as one of the best gunslingers to have ever lived. He holds a strong disdain towards Jim "Boy" Calloway for unknown reasons, and will attempt to kill the player upon a simple mention of his name. Conversely, he has a much friendlier attitude towards the Red Dead Online protagonist. While he initially holds them at gunpoint, he lowers his gun upon realizing they are a criminal just like him, and offers them work, for which he always pays them fairly. He also has somewhat of a dark sense of humor, as he will shoot at the protagonist and intentionally miss, only to laugh at their reaction.

Flaco is a middle-aged Mexican man with an average build, and sports a short mustache and goatee. He wears a brown furry coat, which is suitable for the cold climate, a sombrero, fingerless gloves, and long boots.

In an image depicted on a Cigarette Card, which presumably shows Flaco in his younger days, his skin is visibly darker, and his beard is shaved. He wears a white shirt, a beige-colored jacket, green neckwear, brown furry pants, leather gloves, and a different hat.

Before the player can duel Flaco, they will first need to confront him, which requires getting past his men. The easiest way to do this is to use the "Threaten" option when confronted by his gang, which will cause them to back off. If the "Defuse" option is used, the gang will initially keep their distance, but will then attack the protagonist soon before they reach Flaco. Alternatively, the player can also kill them all before going to the cabin.

During the duel, Hernández uses a unique strategy where he dives to the player's right as he draws his revolver, in order to make himself harder to hit.

Furthermore, the duel with Flaco is the only one in the mission where, if a low-powered sidearm is used, the opponent may not be killed in a single shot. If this happens, Hernández takes out a Sawed-off Shotgun and shoots at the player, alongside any remaining gang members. If Flaco is disarmed, it will result in the same scenario. It is therefore recommended to use Express Ammo or a powerful sidearm, like a Volcanic Pistol or Schofield Revolver, to ensure he dies in one shot to the head or torso. Otherwise, the player can simply shoot several times.

Since the player will not lose Honor in duels which are part of the mission "The Noblest of Men, and a Woman", the easiest way to beat Hernández is by cheating: players should only partially charge the draw meter, to make sure they do not miss, before shooting. Otherwise, they can also immediately activate Dead Eye, manually adjust the aim, and then shoot. His custom revolver, Flaco's Revolver, can be obtained after his defeat. 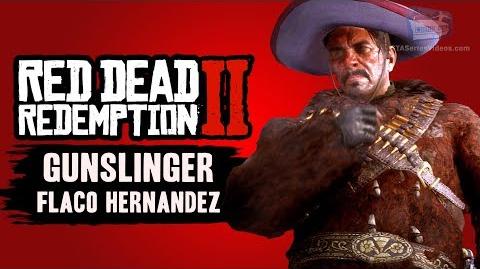