Flat Iron Lake is a large lake located on the eastern borders of the Great Plains region of the West Elizabeth territory.

The lake serves as the game area's eastern border in Red Dead Redemption. The San Luis River flows out from Flat Iron Lake.

In Red Dead Redemption 2 and Red Dead Online, it is located at the center of the five American territories, bordering West Elizabeth, New Hanover and Lemoyne.

Three states have borders on the lake: Big Valley and Great Plains of West Elizabeth to the west, The Heartlands of New Hanover to the north, and Scarlett Meadows of Lemoyne to the east. The Lannahechee River, Upper Montana River, and Dakota River all empty into the lake, which then flows into the San Luis River to the west. 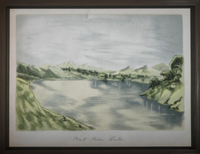 A painting of Flat Iron Lake