Fleeting Joy is a mission in Red Dead Redemption 2.

Arthur is reunited with the gang at Lakay. Milton arrives with his Pinkertons, and attacks the camp.

After Arthur finds the letter from Sadie at Shady Belle, he heads to the location described in the letter near Lakay. Upon arrival, he is greeted by the others and given a drink. Sometime later, Micah Bell and Javier Escuella arrive off screen, followed by Dutch, shocking the rest of the gang, with Abigail immediately telling him that John had been arrested and sentenced to hang. She also tells him that they stole the bodies of Hosea and Lenny from the morgue and buried them, while Strauss says that it is mostly due to Sadie that the rest of the gang managed to survive the ordeal. Finally, Bill Williamson enters with evident frustration, saying how he asked everywhere where to find the gang.

Almost immediately afterwards, the reunion is cut short as the Pinkertons descend upon the camp, with Agent Milton telling the gang to surrender, and then deciding to fire a machine gun at the gang. To combat this, Sadie tells Arthur to follow her, saying that there is a trapdoor somewhere that they can use to flank the Pinkertons. The pair do so, and begin a counterattack on the Pinkertons, who set fire to the village. During the fighting, Bill helps Arthur and Sadie fend off the attack, while Arthur eventually mans the machine gun, swirling it around and gunning down the Pinkerton attackers, eventually causing a Pinkerton retreat.

Afterwards, Dutch thanks Arthur for his help in fending off the attack and expresses concern over Arthur's coughing, while the latter dismisses it as nothing. Abigail reminds Dutch that John is in prison, only to get a flustered response from Dutch, who says that it isn't the right time. Realizing that Dutch doesn’t want to help, Abigail turns to Arthur and Sadie, begging them to rescue John instead. The pair agree, and Sadie asks Arthur to meet her in Saint Denis in the near future. 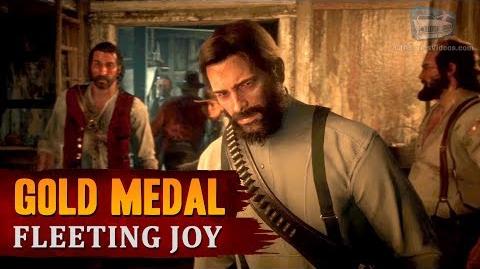 Retrieved from "https://reddead.fandom.com/wiki/Fleeting_Joy?oldid=400017"
Community content is available under CC-BY-SA unless otherwise noted.