Flowers for a Lady

Flowers for a Lady is a Stranger side-mission featured in Red Dead Redemption.

Marston comes across an elderly man named Billy West, picking flowers on the side of the road. The man wants to give his wife, Annabel, a bouquet for their Golden wedding anniversary. He asks for Marston's help in gathering the flowers.

After speaking with Billy West, the player must:

Start the mission by speaking to Billy. He can be found just east of MacFarlane's Ranch and just west of Stillwater Creek. Billy will be marked with a "?" to trigger this mission.

After giving the flowers to Billy, he invites Marston into his cabin and insists that he try his wife's tea. Upon entering, Marston quickly discovers that Annabel is actually a long-dead and rotted corpse, positioned in a chair. It seems as if Billy is in extreme denial that his wife is even dead at all. When Billy asks Marston again to stay for the tea, Marston says "Sorry, but I have an appointment with planet Earth" and walks away. 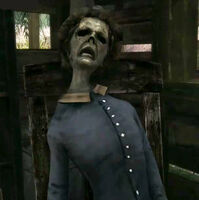 Retrieved from "https://reddead.fandom.com/wiki/Flowers_for_a_Lady?oldid=389564"
Community content is available under CC-BY-SA unless otherwise noted.