Fort Riggs is an abandoned holding camp in Red Dead Redemption 2 and Red Dead Online, in the Big Valley region of the West Elizabeth.

The fort was abandoned at some point and only its wooden structures remain partially intact. Several dilapidated tepees sit within the decaying walls and a mass gravesite is located adjacent on the lower portion of the hill.

The fort is the location of Yukon Nik, a legendary bounty target.

The stranger is a U.S. Army veteran who used to be stationed at Fort Riggs. He tells the player that a lot of Native Americans were suppressed and held in captivity in the Fort. He also states the U.S. Army ended up killing a lot of Indians in the Fort.

In the central building of the fort, players can find a letter that contains the correct spelling of a variety of English words. This is code when one takes the first letter of each word, the following poem emerges:

Fort Riggs consists of a decrepit wooden fence surrounding several abandoned teepees and a single ruined wooden cabin. There is a graveyard along the fence, and wooden crate are stacked near the cabin. 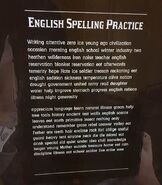