Fossilized Man is a point of interest in Red Dead Redemption 2.

Located between the border of Roanoke Ridge and Grizzlies East, the Fossilized Man is one of many points of interest that the player can find scattered around the map.

To find the fossil, players should head to the railway tracks that cross into both Roanoke Ridge and Grizzlies East. Their destination will be on the lowest ledge closest to the tunnel.

Whoever this was has been here for some time; he may have been one of the early hunter-gatherers that inhabited the plains long ago. 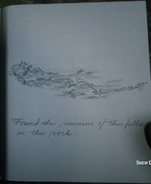 Arthur's drawing"Found the remains of this fella in the rock." 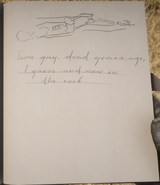 John's drawing"Some guy, dead years ago, I guess and now in the rock."

Retrieved from "https://reddead.fandom.com/wiki/Fossilized_Man?oldid=382788"
Community content is available under CC-BY-SA unless otherwise noted.